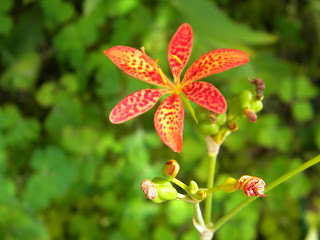 Blackberry Lilly from my garden
Heirloom flower grown by Thomas Jefferson at Monticello
So we had a party this past Saturday. Much preparation of which I will share in the coming days. For now we are enjoying the last day of summer break. That's why I haven't been here lately.

Way before school was out I was thinking of things for us to do this summer as a family. Star Wars movie day was one that I thought Wonder Boy and Southern Cal Boy would enjoy way more than me. 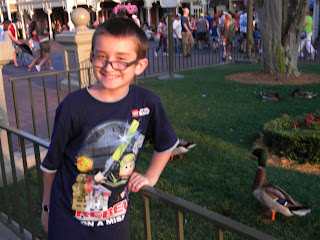 After our Disney trip this spring, another story for another time, the Jedi Training camp had been implanted in my brain and kept popping up again.

So the movie day became the spring board for Jedi Training camp for Wonder Boy and his friends while letting Southern Cal Boy have fun as well.

I craft magic. It's my job. It's what I do. While everyone else is out working the daily grind and getting paid I'm here doing research and making magic happen for the minds of little kids everywhere. And big kids.

So stay tuned. I promise, in the coming days I'll share photos of items we crafted for the cause and links to ideas you can use for your own young Padawans Jedi experience.


Happy Summer!
Candace Mommie
(not wanting school to start so soon)
Posted by Candace Mommie at 12:31 PM No comments: 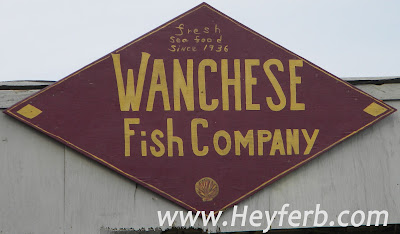 It's not too late to enjoy some good fresh seafood.

On the way home from OBX we traveled the road less taken to the small fishing town of Wanchese where fisherman are able to catch and ship fresh seafood all over the world. 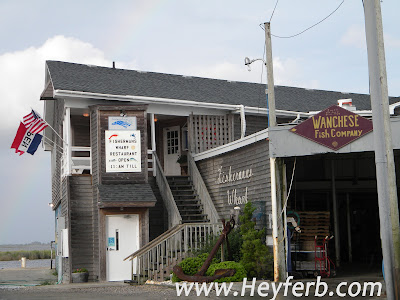 We enjoyed some great seafood at the Fisherman's Wharf in the industrial park area and right on the water. Beautiful view of the water from the dining area.

Haven't been in many waterfront seafood restaurants in years, so it was great and brought back lots of memories of summers spent on the Atlantic Coast and our seafood night at the beach.

I enjoyed the fried sea scallops and shrimp. Um-um!

Southern Cal Boy's stomach had been bothering him so he declined fried and got their Cowboy steak. He shared some with me and it was as delicious as the seafood. It was a steak that would have made Robert Mitchum proud. The link is for you who are too young to know. In the words of Hoops and Yo-yo "He's (was) a tall glass of eggnog." Sit down George Clooney!


Candace Mommie
with an attitude

Stay tuned for ramblings on our Jedi Training Camp.
Posted by Candace Mommie at 12:00 AM No comments:

No telling what you'll see while visiting the OBX. 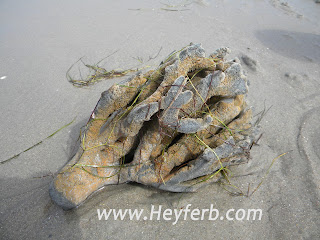 Whether it's on the beach,
in an ice cream shop, 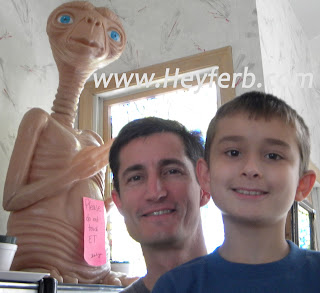 or in the sky. 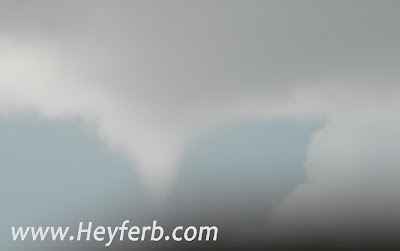 Surprises are everywhere just waiting to be found.

Just a few sites we spyed while enjoying our last get away for the summer.

Next time some fresh seafood.

Posted by Candace Mommie at 4:29 PM No comments:

These are just a few of my favorite things. Not all, but some. Can't believe I have left out Texas Pete from my food rants.

Looks like they left the Old Well off but they included Duke Chapel. Must be Duke fans. I want equal time!

Hold it! I don't see Cheerwine on the list either, do you?
Oh, wait it's number 3. That's more like it.


They left off William Friday. He's out lived Andy. Why didn't they include him? 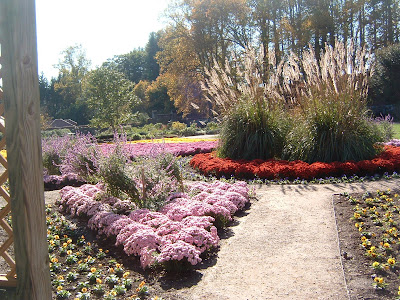 Posted by Candace Mommie at 12:00 AM No comments:

Dinner on the Patio

Here's something to serve with your tomatoes from the other day for a fast, easy, and light dinner. 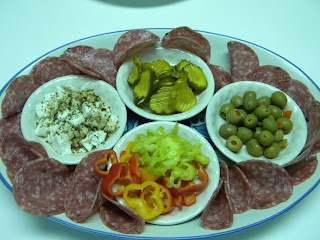 Feta cheese with some Italian herb mix sprinkled on it. See my Father's Day gift posts for the recipe. Salami, deli quality please. Got this at Target in the grocery area. The little red and yellow peppers came from there as well. Add some pickled pepperoncinis, olives of your liking and some delicious bread and butter pickles if you have them. My Mawmaw use to make the best. These are the ones we have now. 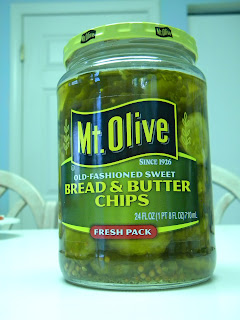 I had to take the photo at this angle.
Bigger than life.
Just like Dukes mayonnaise, Krispy Kreme Donuts, and Cheerwine. Enough said.

The last thing is a big, crusty baguette or loaf of ciabatta. Sam's has a bag of ciabatta rolls that are under $4.00 for a fair amount.

That's a great meal for Southern Cal Boy and I on a Friday when Wonder Boy is at Nana and Grandaddy's.

Hope you have enjoyed your summer and the posts so far.
Let me know if you have.

Have a great weekend.

Posted by Candace Mommie at 12:00 AM No comments: 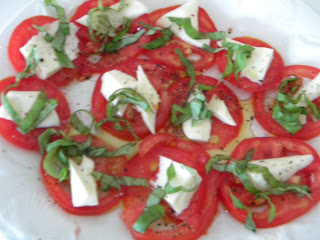 Fresh slice tomatoes, preferably German Johnson tomatoes. Slice up some fresh mozzarella that comes in the big hunk or circle, not the rectangles. Some fresh ground pepper, fresh chopped basil, a little drizzle of olive oil and you are good to go!

Next time, something to go with this for your patio party even if it's just you.

Gardening Tricks on the Cheap

Check out these great gardening tricks. A couple of these I already do. My roses love coffee grounds.


And marigolds! They are the best. They bloom until the first frost. Let the seed heads dry on a paper towel and then put them in an envelope or small paper bag shut with a clothespin and you are ready to plant in the spring. Just tear the flower head apart to separate the seeds. I have been fortunate enough in the past that if I leave the whole plant in the garden until spring or just before, some of the seed heads not eaten by birds will self sow. This year I didn't have as many but I still had marigolds coming up by themselves around the garden. 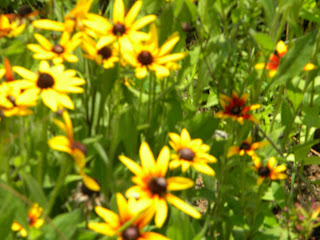 Another tip for plant markers is one I read about in a garden magazine or somewhere years ago. Use plastic knives (from take-out) or buy a box. White or any color you like and use a permanent marker to write the name of the flower, herb, or vegetable you are planting. 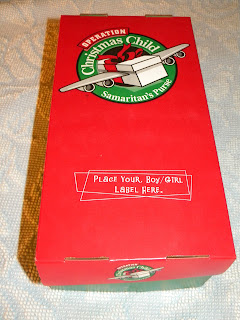 Or pack a shoebox.

Have a good one. 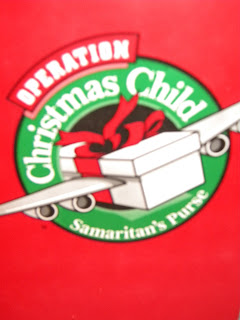 Registration for Samiritan's Purse Operation Christmas Child begins Monday, August 6, 2012. If you can help link to their website for contact information. Share the gospel and good news and love of Jesus Christ and the gift of Christmas with a child. This type of investment is the kind to make.


Call a volunteer scheduler at 800-442-9120 on or after Monday, August 6th at 8 a.m. EDT. You may have to wait to have your call answered. Spots fill up quickly for reserved days to go and work  because there are many who know this is such a worthy cause.

I've volunteered 3 times at a warehouse and it is an awesome experience. You will not be sorry.


If you can't do that please pack a box and take it to a local drop-off point for their 2012 season. Bless your heart and someone else's this year. 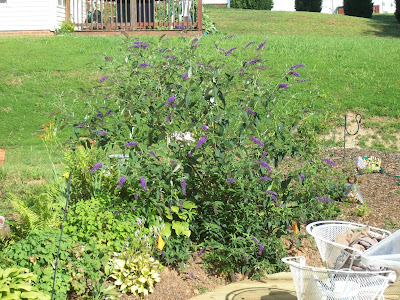 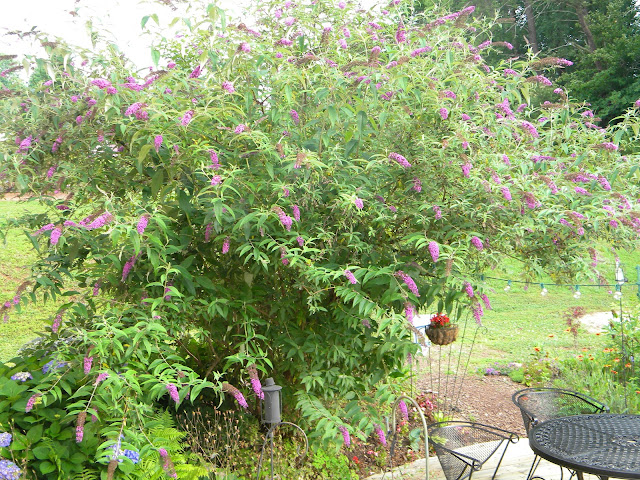 And here it is this summer.

Same chairs too, except they are now black.

Next week the garden tips.

Have a great weekend! 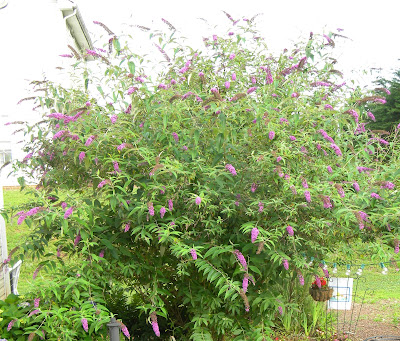 My monstrous butterfly bush from our local farmer's market for $6.00 purchased about 5 years ago. Then it was about two limbs 3 feet tall.

A couple of weeks ago Wonder Boy and I made a butterfly oasis. Been wanting to do this for a long time. We have lots of flowers that butterflies like and colors to which they are attracted (purple, yellow, orange, pink, and red.)

I had clipped an article out of a Lowe's magazine a few years ago and referred back to it. Not wanting to have to purchase a bunch of stuff I found some information on the Internet. Apparently, I didn't keep the link, but this one will do. Besides the type of flowers that attract butterflies, you will need some type of dish to fill with sand and some rocks on top for the butterflies to get warm. 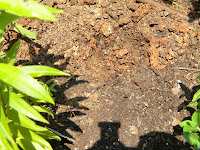 We dug a small shallow hole to put the microwave frozen dinner dish into the ground. 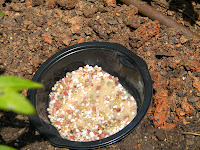 Next it was filled  with tiny gritty rock and craft sand from a closeout bin and some sand we had from the beach.

The rocks were from my late mother-in-law's stash. The cost of our oasis was basically free. We then filled it with water, but not too much. Since then we've had rain sporadically and really haven't had to fill it again. Also, where it sets in the garden the misters usually get it wet as well. 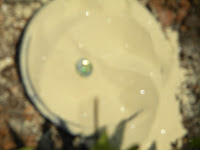 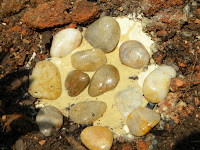 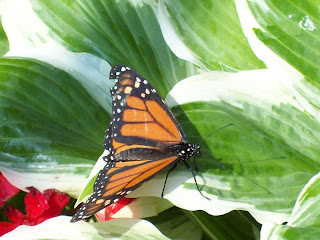 The lost Internet link's author told how she watched the butterflies in the morning after incorporating the dish filled with sand, water, and rocks in her yard. We see butterflies all over the place because of our flowers.

But we have not taken the opportunity to watch and see if the butterflies actually dig the oasis or not due to a week of VBS, a  week of running here and there for haircuts and visiting loved ones. We are summering and that is why there also has not been many posts of late. Did I mention my dishwasher was broke for about 3 weeks? ... and we've had various other technical difficulties. Anywhoo...I digress.


Remember the beautiful pictures of the potted flowers at Mother's Day and earlier in the spring/summer?2 hanging baskets and several potted flowers were burnt toast due to the sprinkler not coming on or not enough while we were gone at the end of June.

Due to the recession and knowing we were going to be gone again, I resisted the urge to run out and replace them. Instead I planted some marigold seeds from last year and petunias and other seeds that had not made it into the ground. Some of them are tiny, but if the heat lasts until October like last year, they should have some bloom time. 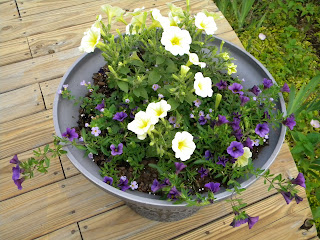 The yellow petunias died and the purple million bells are all that's left. Don't think I took a picture of those when they were at their peak. Made me sick. I never said I was Martha. My friends and family who don't do any of the things I do, often accuse me of being Martha. But I'm saying it again, "I'm not Martha". I'm sure she's groovy and all that, but she often nauseates me.  So I usually don't tune in. I'd rather check out some mom blogger website and see what's going on in a little bit more of the real world. It's more fun and usually the information is more helpful.

Stay tuned for my upcoming post on gardening tips. Freebie: Make sure the sprinkling system timer is on and the batteries are fresh.


Happy Summer!
Squeeze all the good out of it while it's still around. 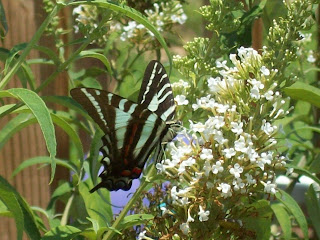 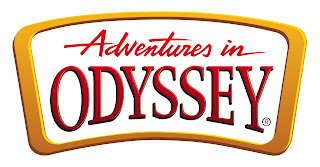